“My sales go down thirty percent if I wear jeans,” laughs elegant, friendly, and enthusiastic Michael Kourosh, as he shows me around his stunning new 25,000 square foot home design showroom, arguably the largest in Santa Barbara and perhaps the entire county. The nattily dressed 43-year-old father of two is a well-know Santa Barbara businessman, initially recognized for his knowledge of Persian and Oriental rugs. His magic carpets, rugs and tapestries have graced many of the finest homes from Hope Ranch to Montecito, as well as The Four Seasons Biltmore, San Ysidro Ranch and more recently, El Encanto. Over time, Kourosh felt the need to expand his inventory to include home furnishings and decorative accents, working with the design trade and retail buyers, Santa Barbara Design Center, his vision, was born.

Based on State Street for decades with his store Rugs and More, just across the street from the Santa Barbara Museum of Art, he noted that changes in the downtown landscape prompted his recent move, noting that higher rents were pushing out many locally owned businesses that couldn’t compete with the large national retailers that moved to downtown in recent years. Kourosh’s back-story is an interesting one. He was born in Persia in 1970. After the revolution in 1979 and start of the war, Michael’s parents –wanting to make certain that their teenage son wouldn’t have to fight in the Iran-Iraq war –”shipped,” the 15-year-old of to Germany. He lived on his own, and attended college in Hamburg, but was under the watch of a relative.

“After school hours, I worked for my uncle. He was one of the biggest rug importers from Persia who sold to clients around the world,” said Kourosh. Under his tutelage, Michael learned about antique rugs (100-200 years old) and tribal rugs, as well as rare classical carpets that have survived 300-700 years.

While studying mathematics at Hamburg University, Michael came to visit his cousins in Santa Barbara and “fell in love with the area.” After graduating, he moved to town and, noticing the lack of high-end Persian and Oriental rugs available, opened his first shop in 1990. Fast-forward 23 years later, to the new showroom, where room vignettes help the buyer imagine how pieces would fit in an interior setting.

On a recent tour of the new space, my eye was drawn to many items: rattan baskets with leather handles, handsome and, more importantly, comfortable, custom sofas and a chaise by Rhineback that would suit Lady Racamier to a tea. The Zoey, a mid-Century style couch Kourosh manufactures here in California is perfect for current tastes, as are stunning French-style chandeliers that hold candles on sale for $2900. There is something for every budget, including plush pillows and throws. There are also lamps, mirrors and all manner of decorative accents. The upstairs is filled with a cornucopia of treasures to sift through, including a smattering of Asian and European antique pieces and custom made pieces of recycled wood incorporating antique elements. Additionally, Kourosh has added fabric lines–including Ralph Lauren, Kravet, Lee Jofa, Dura Lee and Robert Allen for upholstery purposes on his line of custom soft goods, as well as for drapery and other needs.

“Designers love us,” noted Kourosh, who is as passionate about pleasing those professionals as their clients. “They can select a range of pieces for an installation that can be delivered the next day. We also have our own manufacturing capabilities here in California so we can build and deliver our custom furniture very quickly.”

Kourosh is as proud of his two children Kevin, 12, and Nicole, 10, as he is of the fact that his business has been voted #1 Rug and Furniture Store many times over the past 20 years by Santa Barbara News Press readers.

Despite being “most comfortable in jeans and cowboy hat,” the Santa Barbara Design Center owner is savvy enough to know better, than to mess with a proven formulas. The next time you pop into SBDC, whether wearing jeans of Chanel, just look for the well-dressed gentleman, anxious to please. 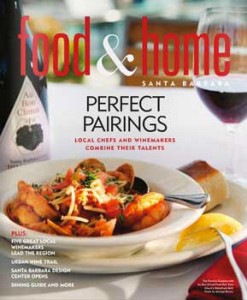 Sales & Deals in Your Inbox

Sign Up and be the first to know about sales, discounts, and special events!